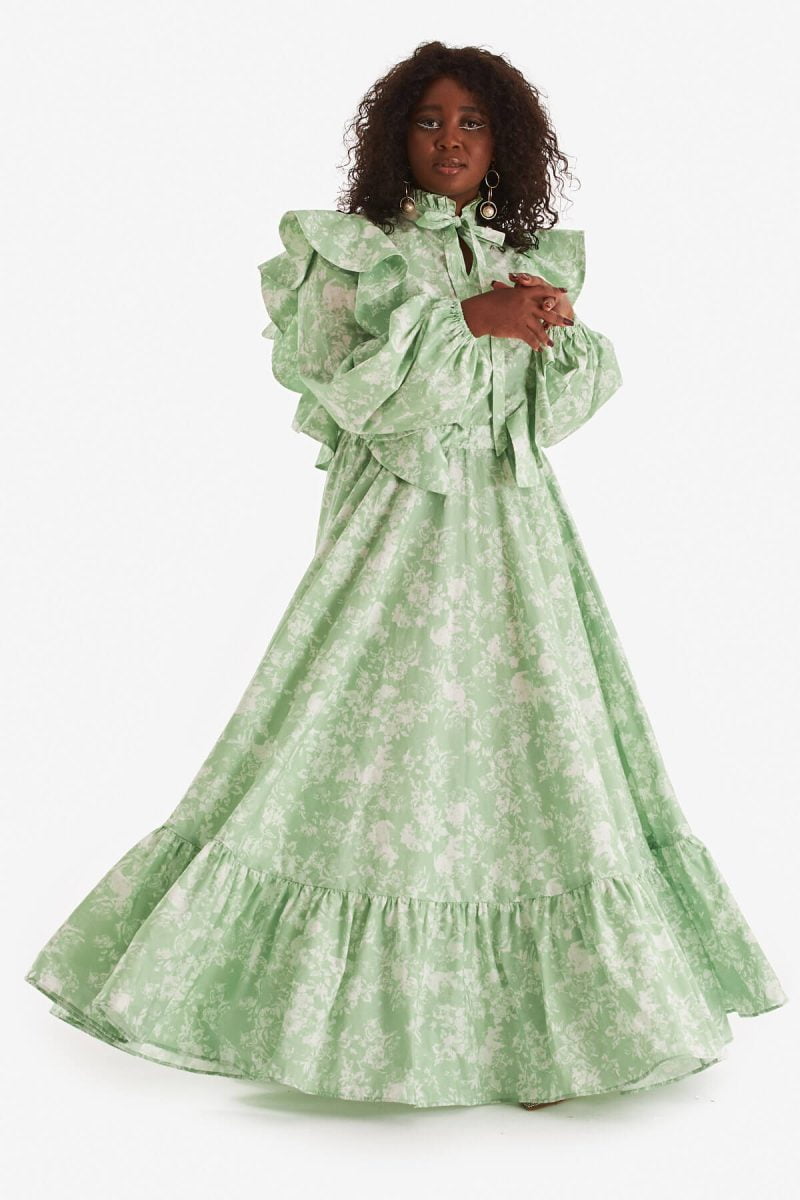 There are no reviews yet.

This is the dress for everyone who’s ever dreamed of being the star of their own fairytale. Every time we launch a new collection we say this is our biggest dress yet, but I swear it’s true and this is our biggest dress yet, yet again. Featuring a full circle skirt, dramatic vertical frills over the upper body, puffy sleeves – honestly, with this dress, who cares about the prince.

Psst, wanna know who Leola is?

Leola King, also known as the Queen of the “Harlem of the West” was one of the first Black women to own and run a Bay Area night club in the 1950s. The San Francisco Redevelopment Agency began taking King’s properties through eminent domain, paying her a small percentage of what they were worth, and eventually wiping her out financially. Ms. King continued to fight the San Francisco Redevelopment Agency for just compensation until she passed away in 2015 in Palm Springs, CA.

Lance Burton, founder of Planet Fillmore Communications, who grew up in the Fillmore and remembers King in her heyday wrote after her death in 2015: “Mrs. King was like a big movie star to many of us, a star who brought some very bright moments to our community—maybe the most golden period of years ever to have been seen in San Francisco by black folks before or since… Mrs. King gave our people a chance to dress up and shine in a Sunday evening of glory. That’s the image we ought to remember, because everyone else wants to obliterate any image of greatness among Black people.”

Hand wash or machine wash at 30ºC. Do not use bleach. Do not tumble dry. Line dry or dry flat. Iron inside out, on low temperature setting.

If you are not sure what size to get, please consult the Size Chart. You can also get in touch with us here if you need further help.

If you are not satisfied with your purchase you can return it to us within 14 days for a refund.
More info

Petite? Tall? Atypical body? If you don’t find yourself among our sizing or are not sure which size would fit you best, get in touch with us for counselling and free of charge custom orders.

A curated experience of clothing,
made for EVERYbody

BASIC PIECES
for every day

Don’t know your size? No problem! Please consult our sizing charts to be sure you are ordering the right fit for you.

The BUST circumference should be measured under your arms, around the body, over the fullest area of your bust.

The WAIST circumference should be measured around the body, at the natural waistline, at the smallest point in between the chest and belly button.

The HIPS circumference should be measured around the body, across the fullest part of the hips.

We will still do custom orders free of charge if you need it – this applies both to sizing up/down what we currently offer and customising in case you are in between sizing, the sizes for chest/waist/hips differ, length for petite/tall and if you have certain special requests for accesibility/mobility.

Need further assistance regarding this product? We’re here to help.

Cookies are an essential part of the way our website works. The main aim of our cookies is to enhance your browsing experience – by remembering things such as your preferences (currency, language, recently viewed products, etc.) while browsing and for future visits. We never have and never will sell customer data to any third party. By clicking “Accept”, you consent to the use of all the cookies.
Cookie settingsREJECTACCEPT
Manage consent